Abstract
Background and Objectives
After the potato and tomato, onion production is in the third place in world, but planting it in the fall season is faced with the problem of bolting. Although flower production is one of the main stages of seed production, flowering branches formation by consuming foods stored in the bulb reduces the quality and quantity of products. Critical size of plants for stimulating the production of flowering branches depends on genotype (Brewster, 1985). Temperature requirement for stimulating flower production varies between 5 and 12 degree Centigrade (Khokhar et al., 2007; Wiebe, 1990; Brewster, 1982). Thus, studying how this phenomenon, effective environmental conditions and its inducing factors for identifying bolting resistant genotypes is considered important.
Materials and Methods
The seeds of six Iranian landraces genotypes of onion including Lorestan, Qom, Tehran, Kerman, Hormozgan and Sistan (received from Iranian Gene Bank, Karaj), 10 indigenous genotypes collected from different regions of the center and south of Iran, as well as two foreign commercial cultivars were planted in pots in the greenhouse condition. After reaching the eight leaf stage, plants were transferred to the cold room. The average temperature of cold room was 8 °C and photoperiod was 11 hours brightness to simulate winter condition. To evaluate cold requirement for bolting, two different treatment times (45 and 70 days) were considered. After that treatment, pots were transferred to the greenhouse. Some morphological, phonological and physiological traits were measured.
Results
According to results of analysis of variance, differences of all traits between all studied genotypes were significant showing high variability in genotypes. Also, the effect of genotype and treatment for plant height, flowering percentage, total leaf soluble solids and total leaf soluble protein was significant. In this study, Kerman genotype was identified as the most resistance genotype to bolting in both treatments. Then Ghale Reiysi, Golden and Badrood genotypes, with the small flowering percentage showed the highest resistance to bolting. Badrood genotype had the highest sensitivity to bolting.
Discussion
Kazemi Shahandashti et al. (2011) suggested that cold treatment inhibits cell division so the temperature decrease leads to stoping the growth and changing the synthesis of proteins. However, in some plants during the cold treatment, adaptability to cold is normal and higher height in some genotypes can be attributed to cold adaptability of them. These results generally reflect the diversity between genotypes in terms of flower production and indicate that in line with other studies (Darabi, 2010), the flower production reduced weight, length, diameter and volume of bulb. In general, increase in total soluble solids can be considered as a physiological index for resistance to bolting. 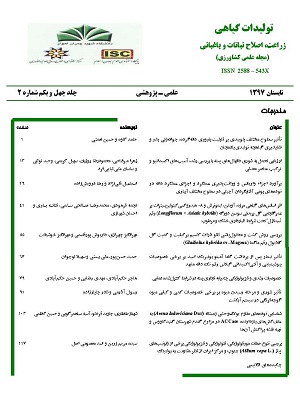